Division of Geriatrics and Palliative Medicine

What is the Cornell-Penn Interview for Decisional Abilities (IDA)?

The Cornell-Penn Interview for Decisional Abilities (IDA) is an evidence-based, ethically sound, semi-structured interview tool developed for use by Adult Protective Services (APS) workers when gathering information about a client’s decision-making abilities.

What does the IDA do?

The Interview for Decisional Abilities (IDA) tool is designed to accurately capture an individual’s general understanding and personal appreciation of risk as well as the ability to make reasoned decisions about service options. The Cornell-Penn IDA can also help navigate a vulnerable adult’s right to refuse protective services – the right to self-determination

Do I need to take the IDA course to use the IDA in the field? 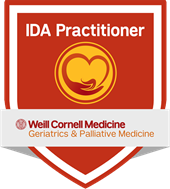 The IDA Practitioner online course will introduce APS workers to the IDA interview tool and provide many opportunities to practice through a series of scenario-based exercises.

Full participation in this training program will enable workers to:

The IDA Practitioner online course provides invaluable skills that will be useful to APS workers throughout their careers in helping vulnerable adults.

The Interview for Decisional Abilities Practitioner course takes place entirely online and is self-paced. There is a live workshop conducted over Zoom where learners will have the opportunity to practice the Interview for Decisional Abilities with guidance from expert IDA trainers.  Learners will be provided with ‘IDA Practitioner Level’ certification and digital badge following completion of the program.

Learner completion of the entire IDA Practitioner course, and certification, is REQUIRED for learners to use the Interview for Decisional Abilities (IDA) in the field following training. 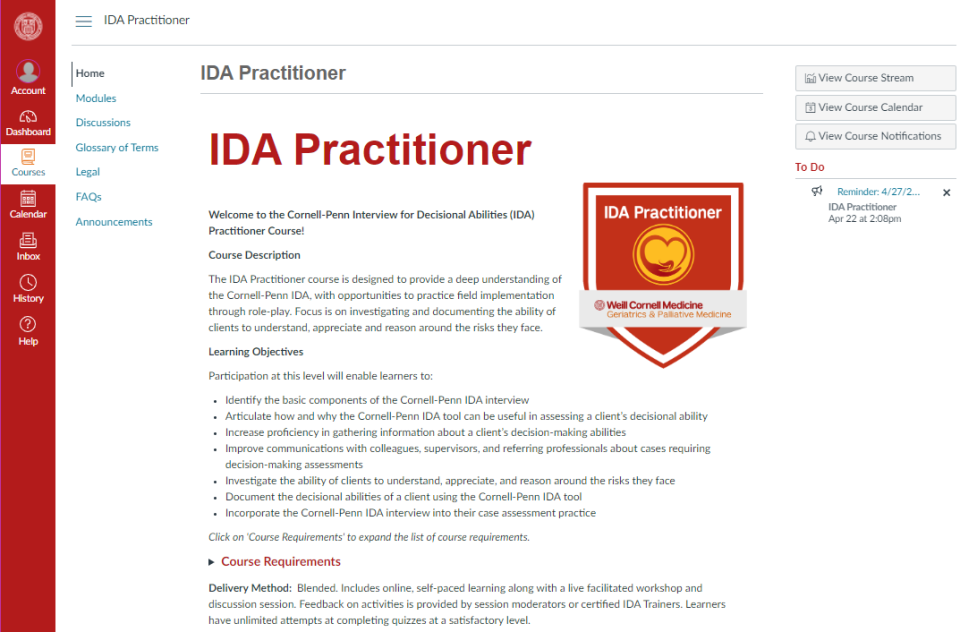 What are the advantages of using the IDA?

I already use the MOCA, MMSE and/or other cognitive assessment tools in my work. Why do I need the Interview for Decisional Abilities (IDA)?

The IDA is NOT

Get to Know the Cornell-Penn IDA Team 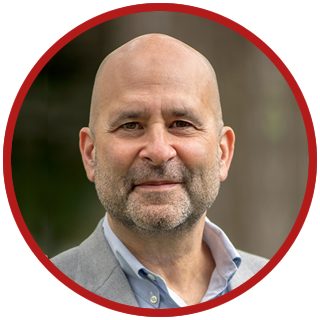 Mark Lachs, MD, MPH, is the Irene and Roy Psaty Distinguished Professor of Medicine at Weill Cornell Medicine, Chief of Geriatrics and Palliative Medicine, and the Director of Geriatrics for the NewYork-Presbyterian Health Care System.  Both a practicing geriatrician and an physician scientist, Dr. Lachs has devoted his career to protecting the rights and dignity of older adults with a special focus on victims of elder abuse.  IDA was developed by faculty members in his program based on years of experience with elder abuse cases after recognizing that adult protective workers can and should have a greater role in the assessment of decision making capacity in older adults. 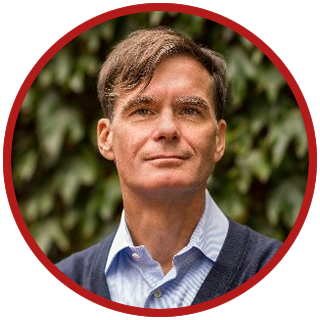 Jason Karlawish, MD, researches and writes about issues at the intersections of bioethics, aging, and the neurosciences. He is the author of The Problem of Alzheimer’s: How Science, Culture, and Politics Turned a Rare Disease into a Crisis and What We Can Do About It. He is a Professor of Medicine, Medical Ethics and Health Policy, and Neurology at the University of Pennsylvania and Co-Director of the Penn Memory Center, where he cares for patients. Some of Dr. Karlawish’s early work demonstrated that non psychiatrist physicians could assess decision making capacity in older adults as well as psychiatrists in many or most cases; IDA was created to extend this work to adult protective service professionals and other non-physicians who work with older people. 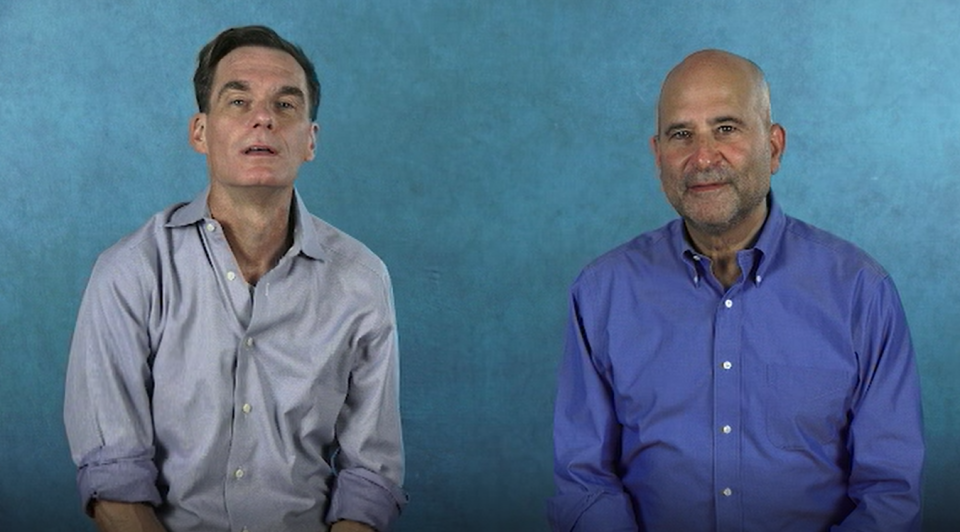 Grace Cheong, LMSW, is the Program Manager of the National Elder Abuse Multidisciplinary Team (MDT) Training and Technical Assistance Center (“the Center”), a program of the New York City Elder Abuse Center (NYCEAC) at Weill Cornell Medicine. Grace has over 20 years of experience in policy development and program planning and delivery. She played a key role in the development and enactment of Singapore’s key legislation protecting vulnerable adults – the Vulnerable Adults Act (2018), and the establishment of Singapore’s first Adult Protective Service. She received an MS in Social Work from Columbia University, and a BA in Political Science and International Relations from the University of British Columbia.

Cory Henkel, MHA, is Administrator for Geriatrics and Palliative Medicine at Weill Cornell Medicine. She is a graduate of Yale University and completed her Master of Healthcare Administration at Duke University. Prior to joining Weill Cornell, she served as Chief Operating Officer of the National Organization on Disability, and as the Administrative Director of the International Early Lung Cancer Action Program (I-ELCAP). She serves on the executive board of directors of AHRC New York City, a $350 million not-for-profit organization dedicated to enhancing the lives of individuals with intellectual and developmental disabilities. She is also on the board of directors of Elderabuse.org, the only national charity with a focus on elder abuse.

Lina Irias, LMHC, is a Helpline Clinician at the New York City Elder Abuse Center’s Helpline for Concerned Persons, where she supports secondary and primary victims of elder abuse and conducts outreach to Spanish-speaking communities. She is a bilingual, bicultural licensed mental health counselor with experience conducting individual, family, and group counseling. She has worked with children, adolescents and adults affected by many forms of trauma, addiction, crisis, poverty, mental illness, and more. Lina holds a B.S. in Psychology from Nyack College and an M.S. Ed. in Mental Health Counseling from CUNY Hunter College.

Ayana Mortley is the Training Coordinator for the NYC Elder Abuse Center (NYCEAC). She collaborates with team specialists to design, coordinate, and facilitate workshops about NYCEAC’s programs, elder abuse, and geriatric medicine. Ayana developed a passion for elder justice during her time as a social worker for the Human Resources Administration Adult Protective Services program, where she developed and facilitated intervention plans for high-risk vulnerable adults. Ayana received her B.A. in Sociology from Wesleyan University and has an M.Ed in progress from Rutgers University.

Sandy Regenbogen-Weiss, LCSW, is the Program Manager for the WCM Wellness Center, at the Center on Aging, in Geriatrics and Palliative Medicine. For more than eight years, Ms. Regenbogen-Weiss ran the HealthOutreach program of NewYork-Presbyterian providing health and wellness lectures to people sixty years and older, as well as managing the Caregivers Service and the Lifeline Personal Emergency System. She has made numerous visits to older adults’ homes, which have resulted in APS referrals. Ms. Regenbogen-Weiss has extensive experience training staff on evidence-based practices.

Bess White, MS, Special Projects Administrator, has led the development of elder abuse programs, including the Interview for Decisional Abilities (IDA) online course, in Geriatrics and Palliative Medicine at Weill Cornell Medicine. Previously, she was a Principal Gifts Officer for Weill Cornell Medicine where she raised funds for a variety of initiatives throughout the medical college. She is Executive Director of Elderabuse.org, the only national charity focused specifically on supporting elder abuse programs. She is currently pursuing a Masters Degree in Public Health at Columbia University, with a focus on healthy aging. 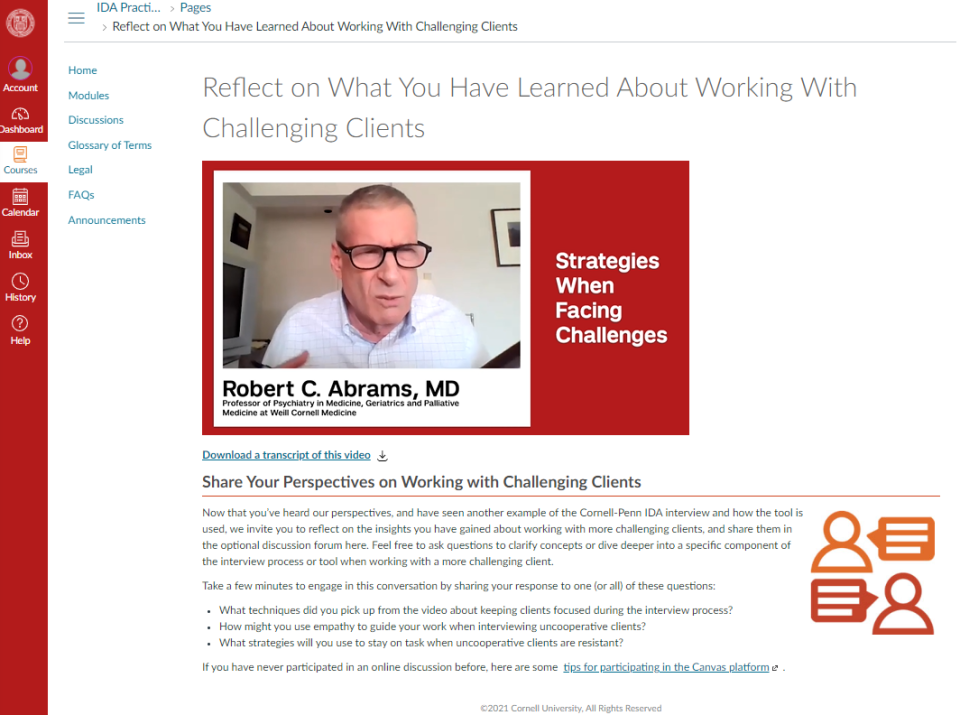 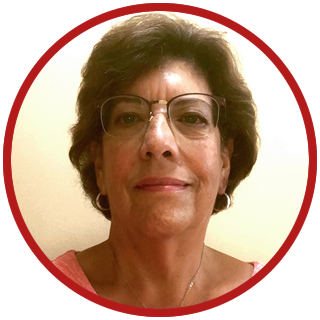 Veronica LoFaso, MD, is an Associate Professor of Clinical Medicine at Weill Cornell Medicine. She completed her residency at NewYork-Presbyterian Hospital where she has remained for the past 25 years in the Division of Geriatrics and Palliative Medicine. Dr LoFaso currently serves as Geriatrician on the Multi-Disciplinary Elder Abuse Teams (MDTs) in Manhattan and Brooklyn and is the Medical Director of the MDTs in all boroughs of NYC. She has particular expertise in the forensic aspects of elder abuse and neglect and has published extensively in this area. She continues to care for patients at the Weill Cornell Center on Aging in NYC. 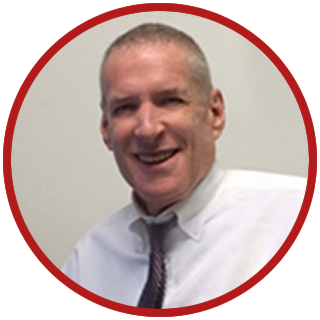 Robert C. Abrams, MD, is a graduate of the University of California at Berkeley and received his MD degree from the Mount Sinai Icahn School of Medicine in New York.  He is a Professor of Psychiatry in Medicine at Weill Cornell Medicine in New York City, where he maintains a clinical and teaching practice in geriatric psychiatry at the Weill Cornell Center on Aging.  He has written extensively on old-age depression, suicide and personality disorders as well as the problems of aging as depicted in historical accounts, film and contemporary literature.  He is the author of Staring Night: Queen Victoria’s Late-Life Depression. 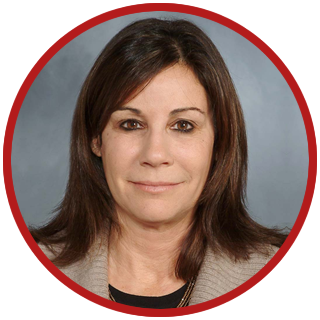 To learn more about the Interview for Decisional Abilities (IDA) and the online IDA Practitioner course, please complete this request form: